Posted on April 19, 2017 by adventureswithpoopsie@gmail.com

If you’ve been reading our Australian Blogger Interview series, you know that one of the questions we ask is whether or not people in their real lives know about their blog. 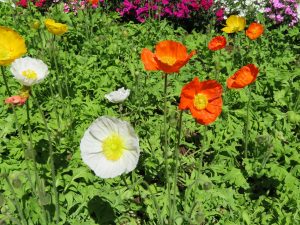 We realise, we have never answered this question, so thought we would today. We will expand it a little and explain how much people in our real life know about our blog, our early retirement plans and our frugality.

There are only two people in our real life who know about the blog. The first one is my best friend. We have been friends since we were seven years old. She moved away when we were nine, but we have managed to keep the friendship going which is fantastic and a testament to the bond we have. She was going through some financial adjustment in her life and, knowing I had an interest in this, asked me for some advice. It got to the point where I so often wanted to tell her “oh yeah I wrote a post about that, go and have a read” that I just ended up telling her about the blog. I don’t think she reads it much anymore, but she certainly knows about it and checks in occasionally. 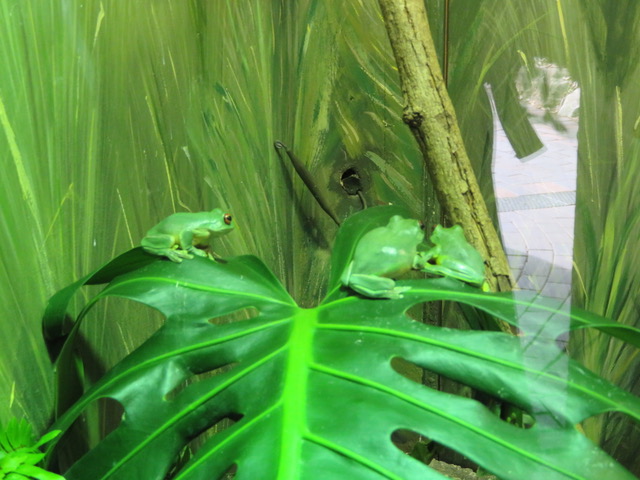 Best friends are the best.

The other person who knows about it is my sister. She inadvertently stumbled across our Instagram page. I have no idea how, as it wasn’t linked to my personal account. We were actually sitting in the courtyard of the Museum of Modern Art in New York City when she sent me a text message telling me she had found the blog. Sprung! She does still read it but doesn’t have a particular interest in personal finance, so probably just reads it because I’m her sister. I have made her promise not to tell anyone about it- hopefully she listened!

Both of our families are aware that we have plans to retire early.

Poopsie’s parents are very frugal by nature. They were self-employed for most of Poopsie’s life and worked hard to build up their superannuation and investment accounts so they could retire comfortably. To be honest, they probably oversaved and could have retired earlier than they did. However, they live a great life now with lots of travel and experiences. They are vaguely aware of our plans but, as far as I know, have never sought any specific details about how we plan to do it. Poopsie has one sister who perhaps we’ve mentioned early retirement to in passing, but she has never inquired further. 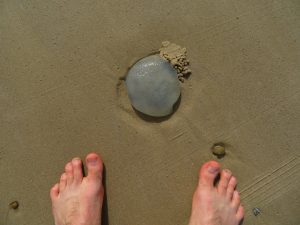 My parents are aware of our plans and very supportive. Strangely enough, my mother is, by many standards, an early retiree. She was a public servant for most of her life and was offered a redundancy at 54. Part of this redundancy package included early access to her defined benefit pension. This pension is enough for my parents to live on frugally, so I am confident they will be comfortable for the rest of their lives. My dad still works 3-4 days a week, but financially, he doesn’t need to. He hasn’t quite been able to make the leap to become retired, wondering what he’ll spend all his time doing. Work provides a social outlet for him, and he is on quite flexible arrangements so my parents are still able to travel a lot.

My parents do know most of the details of our early retirement plan. I vaguely remember one night we were at their house celebrating with some champagne and great food, and I outlined the entire plan for them. Whether or not I made any sense or they remember what I said, I don’t know, but they do know most of the details. They’re very supportive and excited for us, while being just a little bit concerned that we will run out of money. I think this is a fairly normal concern for parents, and we do our best to assure them we’ll be fine. 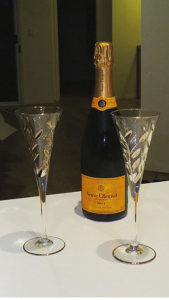 Turns out champagne is conducive to ER chats.

I have three siblings: an older brother, a younger sister and a younger brother. My older brother and my younger sister definitely are aware of our early retirement plans, but probably don’t know all the detail (my sister may if she reads the blog closely enough). I think my little brother knows, but we’ve never really discussed it. My siblings are certainly supportive. Both my older brother and younger sister have told me it’s not for them, but they think it’s pretty cool that we’re doing it. I think there is some skepticism- they probably think this is a bit of a dream and probably won’t happen, at least not on the timeline we’ve set. Hopefully, they will be proven wrong.

A few of our close friends know that we plan to retire early but again, I think there is a reasonable amount of skepticism from them. They have heard me say we’ll retire early, but have probably dismissed this as a pipe dream. Some have questioned why we’d want to. Most of the time, this is along the lines of “why would you want to live on such a small amount of money when you could have so much more if you keep working.” Sometimes we explain that we don’t actually need much to have a great life, but often we just change the subject as it can be a rather emotive discussion to have.

I don’t think there is a person in our lives who don’t know that we are frugal. Sometimes they might use other words to describe it- like cheap. I am confident that we are not cheap, at least not in the harsh and critical context it is usually used in.

If someone we loved needed money, we wouldn’t hesitate to give it to them. Give. Not lend.

When we participate in gift giving activities, we don’t hesitate to spend money on a thoughtful gift to someone.

We spend money to travel to visit our friends and family without hesitation. 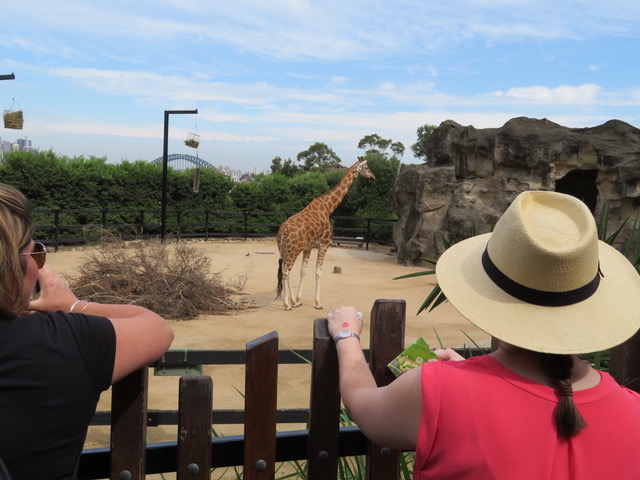 Our recent trip to Taronga Zoo was predominantly to visit family.

Occasionally, we treat friends and family to meals out.

However, we don’t spend money on things that don’t matter to us. We use an internet and mobile phone company most people have never heard of. We don’t want cable television (or even a television), so we don’t spend money on it. We like having a small, reliable car so we do. We enjoy cooking and we’re homebodies, so we are more likely to invite friends and family over for a delicious meal rather than go out.

Most of these decisions are not made to save money alone. We are happy to deprive ourselves if we need to, but we don’t deprive friends and family of our time, money or love. That’s why we don’t think we’re cheap, but if other people do, we can’t do much to change that opinion. We are pretty happy with how our lives are going and will continue to live as good a life as we possibly can.

Is it a secret?

The fact that we want to retire early is certainly not a secret. Sure, we might not tell everyone we know, but it’s not a secret.

I have mentioned it to many people in passing- both strangers and people I know well. For the most part, people dismiss it. They don’t think it’s possible so they treat it as if I just said I plan to be the tallest woman in the world one day (I’m very short). 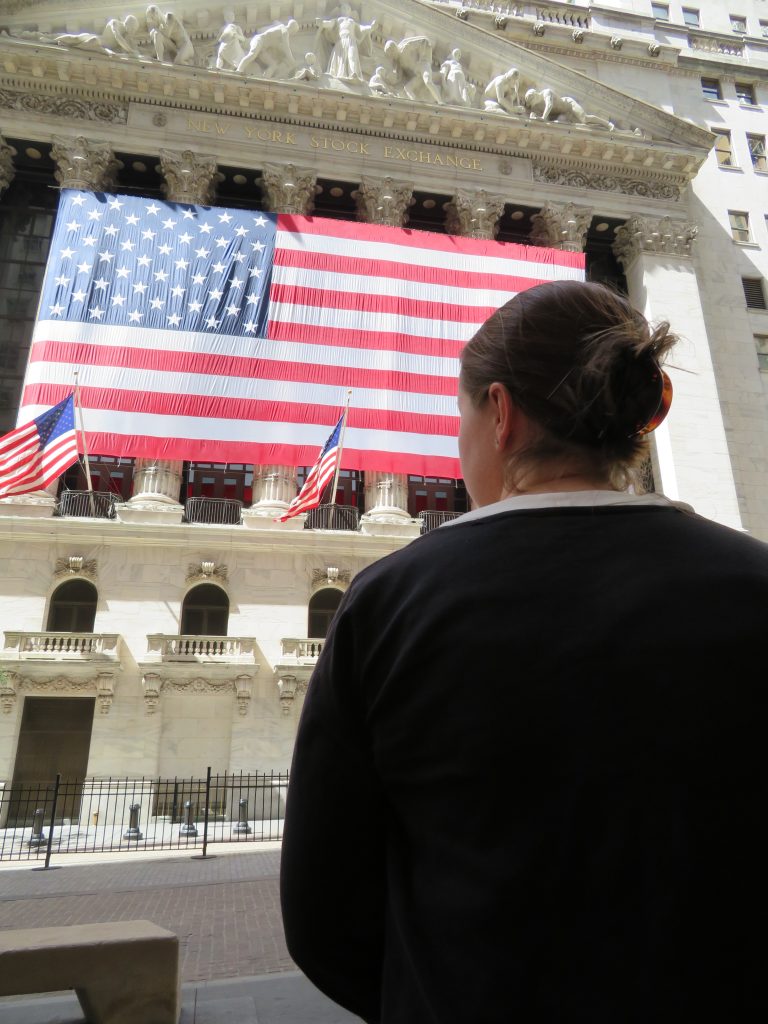 Being dwarfed by the New York Stock Exchange.

I don’t tell people about the blog. I have wondered if I would change how I wrote if I knew there were people I know reading it. I’m not sure, but it’s not a risk I want to take. People also feel the need to judge how we spend our money as it is, so if they saw how much we saved, they’d probably do this further. If I turn down an activity because I think it costs too much, the response I often get is “but you have heaps of money.” I’d much rather avoid having this conversation.

We haven’t decided if we’ll tell people about the blog once we retire. It could be a good way for friends and family to keep up with our travels, and to see that it really is possible through careful planning and frugality. We’ll see- that’s a decision we will make much further down the track.

Do people in your real life know about your blog (if you have one), your early retirement plans (if you have them) or your frugality? Share in the comments below!

8 Responses to Sharing the Dream